I believe this is the first major design flaw (not from an MVC design perspective but rather, just from a framework design perspective) and the cause of a number of other design issues. Because a controller doesn't have access to an instance of the view it enlists, the only way for a controller to communicate information to a view is by using ViewData which is a Dictionary<string, object>. So you can stuff anything you want in there, with each “thing” identified by a string key. The two code listings below show you some code that do the same things but in entirely different ways. Code listing 1, shows you the code you'd write in a controller's Action method in ASP.NET MVC and Code listing 2 shows you the code you'd write in a builder's BuildPage() method in Quartz for ASP.NET

The problems with this (code listing 1) approach are: A strongly typed view makes thing slightly better. So you can define a specific ViewModel for your view and now the view can refer to this ViewModel is a strongly typed manner. But what about the partial views? Needless to say that if you analyze all this you'll conclude that: If the controller had access to instances of the view, partial views, master views etc. then you'd have code like that shown in Code listing 2. Doing all of the above *is* the controller's concern. If not, these concerns propagate throughout. Take a look at Figure 3. It shows you the connectivity and control flow of what the picture would look like where the controller has direct access to the view, partial views and master views.

The Controller is not really in control

Take a look at Figure 1, and you’ll see that the controller only really talks to the view (via ViewData nonetheless because it never really has access to an instance of the view). It doesn’t control or seemingly know of the partial views this view may in turn enlist, in order to get the job done. But the controller does need to know of the partial views because it has to pass data and instructions to partial views. One could argue separation of concerns here. But I beg to differ because propagating responsibilities down the line makes a system incoherent, unmanageable and a maintenance/debugging nightmare. You have to follow bread crumbs from the controller to the view and from there to other partial views just to get a sense of what is going on and who is doing it and who is using what piece of data (that the controller put into ViewData). A big part of the reason for this design seems to be that the view needs to be compiled (the html + code) and so an instance of the view can only be realized after compiling. However, since the view does not use a code file, the controller won't know how to reference the view since it doesn't have a class type to reference at the time of compilation. One could get around this by having the view descend from one of your own base classes, that way you can reference the view solely as the base type and so the controller can be compiled. But getting an instance of a view (due to the ViewEngine and compilation model) is not that easy. Code listing 3, below shows how you can get an instance of a view. It's pretty convoluted, since it is not the intent of code compilation model.

Code Listing 3: Getting a reference to an instance of a View

If you created instances of your own classes that implemented IView, then you get all the benefits and none of the demerits. That tells me that the current design (and inability to program in a strongly typed manner and all the other things we've been talking about so far) are due to one or more of the following:

The View is in control

One could argue that (in the ASP.NET MVC design) the view is really in control. Well, at least insofar as the partial views and passing data on to them is concerned. The issues with this reasoning are: It’s almost as if no one wants to take responsibility and so everyone needs to be concerned!

Let me start by stating the problem RenderAction() is trying to solve. Imagine that in your page, you have a menu system. Typically, menu systems are complex because they are contextual and they depend on the user and her access rights and the page she is on. As a result, one could argue that the menu is not the concern of the view. Ok, I could argue either way, but I’ll go along with this argument.

So the view enlists the services of the Child Action (that is RenderAction() really calls out to another action. This action could be in any controller and is not limited to an action in the controller that started the chain reaction. If we’re arguing separation of concerns, then why is the view calling out to a child action in the first place? Further, in order to call out to a child action (using RenderAction()) it has to be completely aware of the data to pass on to it (again using ViewData to extract the correct item(s) or portions of particular item(s). In other words it is coupled to the Child Action. If the child action changes its API (the parameters and/or types of these parameters) all views that call out to this child action that is not supposedly their concern need to change. And in a situation like this that’s pretty much every view in your system! Let’s say for argument sake that the menu controller (and the views and partial views involved) is self sufficient in that it can function completely as expected using information it can get via the Request context (i.e. request path information, query strings, cookies, session, user identity etc.). I would imagine that if the menu system were designed properly, then that is how it would be designed. Well, it so happens, that when you call into a child action, it is a brand new request (it basically goes back out to the entry point of the ASP.NET pipeline and re-enters the pipeline as a brand new request). See Figure 2. The problem with this design is that the context of the original request is completely lost. So the menu controller doesn't get the information it needs. But wait, the original view has to ensure that it sends all of the information it needs when it calls out to it using RenderAction(). Do you see this tsunami rushing back at you? No, ok, If the view has to send the data to the child action, who provides the view with this data? The controller of course! So now every controller and every view in the system are completely aware of and coupled to this supposedly “not your concern” child action. Well, without really being aware, that is. If you look at Figure 2 again, you’ll start to see the flaws in the design by simply looking at the interconnections between the various parts and the flow of control. Compare that with what you see in Figure 3 below 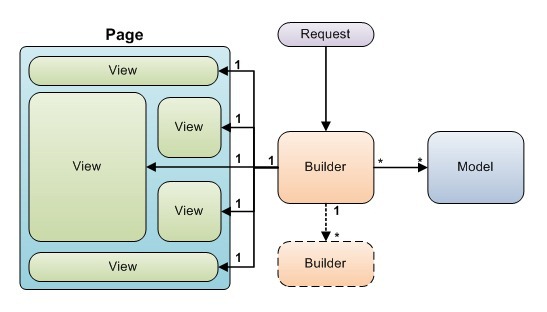 There are a few other design issues, that I'll mention briefly but I won't explain the issues in detail. They are:

I guess Rubyitis could be blamed for the naming and loose typing conventions in ASP.NET MVC? It is a well known and accepted norm to name method names as verbs or verb phrases. Similarly names of properties should be noun or noun phrases. So while in a controller action method, when you see something called View. What do you think it is? Is it a property or a method? If it is a method, is it returning something or not? And if it is a method and it is returning something, what is it returning? You can't tell any of this from the name of the method. Yes, it is a name of a method and it returns an ActionResult Now when you’re in a view, you have access to something called View. What do you supposed that is? I'll give you a clue. You could also write: View.Title. Did that help? Or are you even more confused?